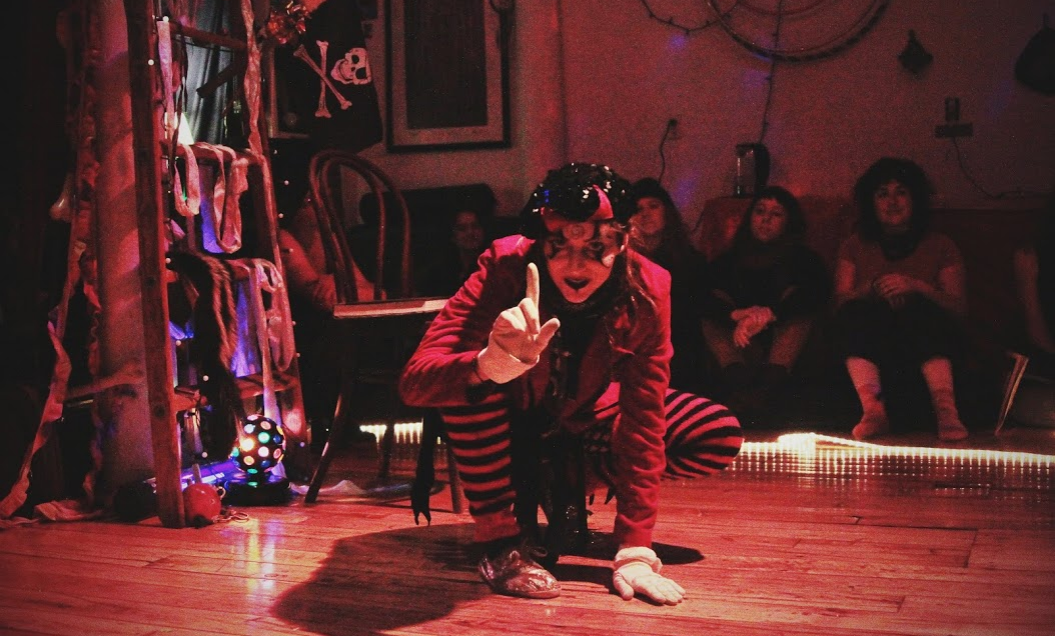 
I came into the office to find a note under my feet. It was pulsating strangely, and in smeared blood-red lettering made an invitation. “THE DEMON THAT DOES GOOD. IMPLORES YOU TO VISIT THE RABBIT WHOLE.”

Now I’ve had experience with demons. Demonic encounters are rife when documenting the spaces between reality, but an invitation is rare. So, I gathered up an unsuspecting colleague of mine, Schenectady Oates, and together we traversed the lonely blackness of the Valley in search of this “Rabbit Whole,” hoping to shed light on the inner workings of such a cabal to an unsuspecting public and allow them a thoughtful glimpse into the idea realm.

As we strode along the western highway, a red energy could be seen floating beyond the horizon. Its field of intensity grew and grew, culminating in a tubular shape towering high above the milltown of Easthampton. Speculation brought us dead center towards the eye of the cloud wherein a wilted warehouse stood menacingly along the banks of a garbage spackled river.

Thanks to the graciousness of an unsuspecting office worker, “The Rabbit Whole” was located, and it was in front of the door where Schenectady and I came into contact with the first being of the demonic cabal. Assuming the visage self-described as “Bubbe, the Eternal Jewish Grandmother”.

The visage assumed the shape of a human woman, seemingly aged between twenty-five to thirty, though dressed as if they were truly a grandmother. Her friendliness was off-putting, for slowly and assuredly she inched us towards a red door labeled “The Rabbit Whole.” Then, suddenly, expelling itself from the Rabbit Whole as if birthed by a tear in reality, we met the demon itself, Demeyes, “The Demon that Does Good.”

“With the Surreal Times, your majesty,” Schnectady said.

Their words danced around us, like sirens from the tales of ancient Greece, they had lulled and serenaded us until we found ourselves standing before the Rabbit Whole, door open, a vast black void inside.

“Enjoy your pressss passss!” was the last thing Schenectady and I heard before feeling the rough sole of a rubber boot on our behinds fling us into the dark.

What transpired next felt like the climax of a fever dream coupled with the voracious intensity of swimming in a void pot. A ball floating in the void, Demeyes delivering a monologue to all souls past and present. The Vampire of Time, Kitty, Death, A Violinist, Damien, Bubbe, Demeyes, The Angel That Does Bad. We watched history unfurl, Babylon on fire, World War Two, the Waco Siege. Demeyes and the Vampire of Time, a destructive duo, a bane on humanity: feeding off fear, swishing blood in their mouths while they tossed matches and danced in the falling ash. They sensed our fear, us, and all the souls floating in the void pot, dead and alive, falling eternally down the Rabbit Whole.

What began as a relationship with a burning passion gradually degraded into the same drudgery for thousands of years. Immortality became boring. God left his creations. Demons ran rampant and destruction became a chore. Time and time again. The Vampire and Demeyes grew sick of each other, sick of the dance of death.

While I floated shapeless in the void, I questioned the demon.

A slideshow reel. Bubbe gives birth to Demeyes. A robed eyeball. Death appears. Her skull protruding through her skin, black veil, flow of tears, roping Demeyes into an eternal dance. I had resigned to the fact that I too had died, that my whole life had been a ploy to lead me to this moment, a demon dancing with death for eternity. The demon had got us good. We had been duped, killed outright. The void pot was our home, the Rabbit Whole the great beyond. I went to close my eyes but I had none to close. The only solace was that souls were real and that maybe I’d get the chance to jump right back into some other meat machine. Memories gone, sure, but a chance at life again. For then, and now, time did not exist. What happened while I floated could’ve been mere minutes, thousands of years, billions of decades. The expanse drudged on, expanding in every direction.

But the expanse did end and the Demon did good after all. For suddenly death had too died at the hands of Demeyes. The veil was lifted and we found ourselves in a room. Demeyes and the Vampire emaciated.

They scattered, readying a strange ritual. A robed eyeball, a moth, a ball of light and a ladder, a tincture being readied, steam, the shrill screech of a violin, masks, lamps, telephone pocketbook. Downloading from another dimension.

Randomly, the room was filled with the sounds of Kate Bush. We had resumed our shapes, and found ourselves shoeless on a series of mats. Demeyes and Damien dancing hypnotically.

“Heathcliff, it’s me, I'm Cathy.” The lights turned off. A candle floated away of its own volition, signaling us revived souls towards the red door of the Rabbit Whole.

For more articles by Vivian Mauve, click here. To get in touch with this writer, email mauve.vivian@surrealtimes.net.