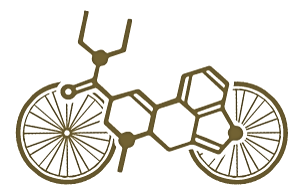 An advertisement appeared on Craigslist this morning, April 19th 2018. It read:

— On this day, 75 ears ago, the grand chemist Albert Hoffman (rest his infinite being) had felt ill. He left his laboratory just hours after arriving, despite his tendency to work long hours and despite the many demands of his ongoing projects. He set out to ride his bicycle home, where he would rest.

— He feared that he may have ingested harmful chemicals in one fashion or another.

— During his bicycle ride, he began to feel extraordinary feelings, think extraordinary thoughts, and see extraordinary things. He experienced incredible sensations and visions never before seen by anyone worldly. And his time on that bicycle ultimately went down in history as the first ever chemical-induced psychedelic experience of all time. It wasn't until later he realized the cause of his changed state of mind.

— On April 19th 1943, a peculiar chemical Albert Hoffman had synthesized accidentally seeped through his laboratory gloves. He soon after found himself on an unexplainable, divine and wild ride we now refer to as the original Bicycle Day.

— Come to downtown Amherst on this fine anniversary of Bicycle Day to live out for yourself the first psychedelic experience ever had. My companions and I have 100 bicycles, each with a coating of liquid intonation juice over its handlebars and seat. The cost to you for an afternoon ride into a higher state of being: nothing. The cost to Babylon: a great deal, we hope.

— Once downtown, lock your eyes onto the purple flag, and the purple skies will find you.

It is not common knowledge what exactly “intonation juice” means. However, the facts uttered in this posting are not inaccurate. Albert Hoffman was indeed a Swiss Chemist who supposedly had the first ever experiences with psychedelic drugs. He did so accidentally, after a mysterious chemical called lysergic acid diethylamide had seeped through his pores. He experienced no effects other than minor sickness for the first hour or two post contact. But, it was not long before this chemical incited vivid, un-ignorable hallucinations in him. And, ever since, his experience has been known as Bicycle Day. What followed were years of more in-depth research on, experimentation with, spiritual leveraging of, and eventually recreational use of lysergic acid diethylamide.

I wonder what relationship intonation juice has with LSD, what motives this Purple Flag Collective might have, and if they will follow through with this stunt of theirs.

I also wonder of the advertisements we began seeing in the skies above Amherst just weeks ago (see: surrealtimes.net/article/?id=220), in which we first heard reference of “intonation juice”.

Who is behind these advertisements? Are they in cahoots with the organizers of this bicycle day scheme? When will we know more about the prophesized Jungle Crow Party?

And, lastly, what will ensue today, during the bicycle day celebration?

For fear of contaminating my mind with nefarious chemicals, I cannot promise to investigate much further this Bicycle day. Also, I cannot righteously direct others to do so. But, I must say: I am curious.

For more articles by Common Observer, click here. To get in touch with this writer, email common.observer@surrealtimes.net.