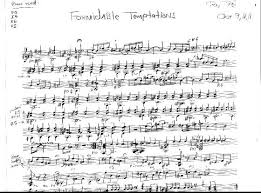 UMass Chancellor Kumble R. Subbaswamy waved his heavy hand last week when he banned student Jason Humboldt from campus and thereby from his position as president of the Atonal Music Listening Club. The chancellor did not respond to requests for commentary.

According to Humboldt, the club's roots are traceable to the surrealist movement and the teenage years of André Breton himself. Breton, often considered the father of surrealism, was directly involved with the AMLC. And, by most accounts, the group emerged from a cousin of the ideological seedling that eventually led to the cultivation of the surrealist manifesto.

In Mr. Humboldt's opinion, the University refuses to admit this history. And so, fearing further "abuses of the softness of memories", Mr. Humboldt dictated to me his organization's inaugural charter.

This antique document is one which Humboldt remains in control of despite the Chancellor's wishes. It chronicles the axioms of the club, which exist primarily to prevent the amending of new axioms and "tendencies of tonality in general". And it provides proof that the club was established as an RSO in 1945, in fact, on the first anniversary of a holiday that goes down in history as the first mass commercialization of surreality: Bicycle Day. Humbolt found it important to say that the date was written in terms of this holiday. Today, Humbolt keeps the document securely in his parents' PO box.

On the theme of atonality, members themselves have embraced lack of leadership, and seem to be continuing their appreciation sessions per usual. Mr. Humboldt, however, encourages skepticism. He also insinuates that the university has ulterior motives.