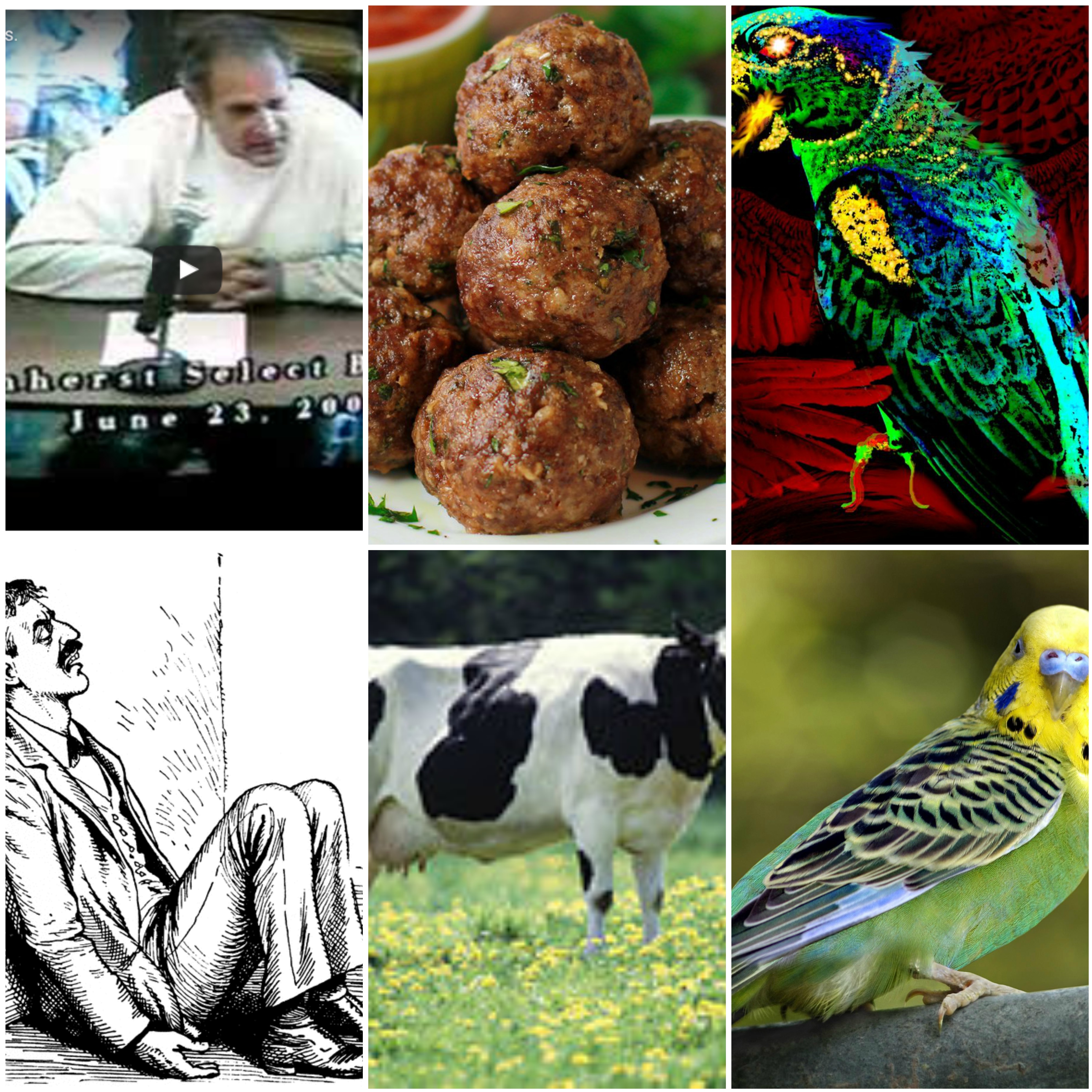 AMHERST, Massachusetts — Hello, ladies and gentlemen, boys and girls. Today Nerb the Great brings to you yet another wonderful (and in this case morbid) connection between things. He speaks of the recent skepticism on the part of Atkin’s Farm Produce Associate Saul Sherk.

Nerb says: “The cattle man was terrible and angry at his superiors because his cattle were shrinking and developing sores. But his superiors laughed at him, calling his words inflated.”

Nerb thinks back, and he takes a deep breath through his broad nostrils. With the breeze he sloops his normal congregation of listeners up his windpipes and into his daydreams. Good oxygen in his head makes for vivid imaginings for both he and the others. Together they see poor Mister Sherk waking in the midst of night — paranoid, peering under his farmhouse windowshades. They see him spying for the sight of henchmen from competing farms replacing his cows with progressively smaller, more seriously ill cows. “Who’s responsible for this?” the cattle keeper questions, “Which is more likely: Mapleline farm, or the slaughterhouse? It must be that pig-bellied rat from the slaughterhouse. I forget his name but I remember his look.” Sherk scowls at the thought of that scheming hairy hunchback seducing his virgin cattle into gross industry, and filing in smaller, less valuable replacements.

Nerb sneezes, sending his onlookers fluttering back into their respectful bodies.

Nerb says: “Sherk swore to his bossman that the man from the slaughterhouse was frequenting the premises. But the boss man waved his fan. That materialized Sherk into a crazy man.”

Such potent recollection on the part of Nerb. That is why I would like to take a moment to say that I am so utterly thankful for what he does for this town.

Nerb proceeds: “But I assure you: anyone can be clean & prim normal just a few clock ticks before having been flipped upside-down into a clinical insanity. Especially anyone whose cattle, each night, are being pecked at viciously by gangs of vicious, satan-enthused birds. And especially anyone whose rooted axioms have been bent around and connected to the tree’s leaves…. Complete absurdity! No way! Absolutely not!”

While just a moment earlier Nerb had been maintaining his usual stoic lecturer wayabouts, leaning with his back against the bricks of the town hall, the mere thought of an unaxiomatic life brings gross contortions upon his stomach and mind. He breaks calm, squinting in the late afternoon at imagined sunlight. Grasping, clawing at the air. Opening his eyes wide and grimacing. Complaining, “It is terrible to even think of such foundationless worlds.”

Oftentimes Nerb lectures until sunset, at which point curious listeners and newspaper reporters alike willingly give him his space to arrange his sleeping bag and bug net, and to go to sleep, or to sneak off somewhere while nobody is looking. But on this day, long before the sunset arrives, Nerb is overwhelmed to the point where he resorts to bouncing his prized steel mug off one reporter’s head, and then another’s, and then another’s, and then off another reporter’s still unsuspecting head, and so on until all had been shoed away, and all but one had been bonked (the sole escapee having strangely suspected a blow, while the others, being so captivated or hypnotized by Nerb, did not).

How I feel for Nerb, in his franticness, both during this altercation and its aftermath (involving Nerb crawling his hands and knees in the darkness, looking for his dentures which had fallen from his mug).

How I am in awe of Nerb, for the way he diligently and with strength searched for his dentures in that mess of darkness. I can imagine the mind rollercoasters that he endured —- involving terrible memories of confusing circular axiom networks, or worse. And I can imagine the satisfaction of finally getting those sharp artificial teeth, coated in dirt, between his mushy salivating gums.

How I pity Nerb, for how he transformed after that one suspicious bonk-dodger returned to display a napkin note, and to hold a small flashlight to it, aiding in the reading process. Nerb huffled and puffled through the long paragraph. He spit out his dentures and ground his bare gums together. By the end of it, he dropped back to his hands and knees on the sidewalk beside the town common. Arching his back, he stuck out his ass, and declared himself a “vagina-mouthed faggot.” All before proceeding to spend next 40 years of unemployment picking up plastic bags and cigarette butts with his hands, sweeping the dirt smooth, watering flowers in and around downtown, and attending town meetings with the sole purpose of convoluting local politics. To this day, Nerb crawls the streets of Amherst going by the name of Bill Elsasser, weeding the premises, being arrested for trimming so-called dangerous limbs from town trees, and spewing shit from his mouth at every passerby.

His final words to me, after I folded crumpled napkin into my jeans pocket, were the following, which he uttered in passing while focused on digging a deeply-rooted weed: “There is a big douchebag in town, going around, doing fantastic things like disseminating so-called informative truths to the masses which may be truthful, but are, in just as much reality, toxins, or better described as parasites, to the mind.” Bill scoffs, then remarks, “God-damned cultural memetic parasites clawing their ways into the minds of our youth, and likewise,” he said, pointing towards himself, “our elderly.”

“I mean, what the damn kind of world is this? We have enough problems with simple objectives like keeping the town clean. Keeping it clean of the heavies, and their trash. And our trash… What use do I have?… what use does anyone have, for meat-eating parakeet birds? Running rampid on our streets? On top of today’s anarchist youth, the animal kingdom? God-fucking lord! What the fuck kind of idea is it to feed pet birds — I’m talking tiny birds — cow meat? I mean, the cow is enormous, and probably at the very least four levels above the parakeet in the food chain. It is a ridiculous and irresponsible thing to do to feed parakeets cheeseburgers, meatballs, or meat sourced from large animals of any kind. Because of the manner in which intelligent species form and propagate (potentially carnivorous) habits. But I suppose today’s heavy youth are indeed ridiculous and irresponsible. And they, with their sagging pants and their ‘no shits’ kinds of wannabe-nihilist but actually angst—saturated & desperately anarchist complexions, certainly would never predict the consequences of giving dozens of little birds the taste of cow meat. So we are really doomed to a world of vicious housepets. They're going to need stronger pesticides, is all I have to say.”

When I asked Bill why he continues pulling weeds, he explained that he did it for the town and the community. But when I asked him why he did this instead of helping solve the bigger problems of the world, he crawled away from me on his hands and knees, and said, “well, I suppose you ought to be GOING now.”

During my walk toward my vehicle, I stumbled upon a group of three home-deprived people in the town gardens. One was a woman who, after her friend finished asking me for pot and to buy their artwork, informed me that Bill was her Romeo, and that she was his Juliette. “He gives the homeless people five dollars every Sunday. And he’s a genius! Totally, wildly rich, and a master piano player! I’m talking like Beethoven, and Mozart!

Note from the editors: Please, for the good of farmers and yourself, do not feed your parakeets meat produce.