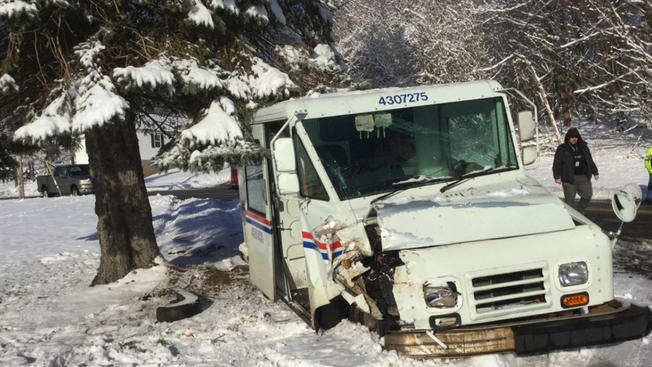 It was cold, but only because we'd gotten used to it being so warm. It was lonesome, but only because we'd become accustomed to company. Mary and I sat blanketed in our recliner chairs, sinking deeply and more deeply into their sludgifying rolls, as we deliberated whether or not to invite over neighbors who could render our supper a dinner party.

I or someone else might say that the new came to us as old, when Mary told me, "Patty, I am remembering something. There is a memory so potent in my head. I haven't the context of it. I don't know what it is. And certainly it lacks any relevance to this here moment. But, Patty, I just must describe to you what I am remembering. I simply cannot not."

I told her, "Mary, sure. Describe to me whatever you'd like."

And she told me that she indeed would...

"I remember seeing a small, reddening mailman out my window -- absurdly small and terribly angry after crashing his truck into a mailbox (and having gotten stuck on top of the thing). He was not strong enough to unstuck the truck himself. So he sought help at the front doors of neighboring homes.

"He asked a man from a small blue house for help lifting his mail truck out of its stuck spot. This man said that he could not help due to his bad back.

"The mailman proceeded to a pink house, where an old widow provided him the excuse of being too old.

"Finally, he proceeded to a gray house, where a gray man admitted to being far too depressed.

"Three houses flumped, and that was that. I watched this little red fellow stare at his hopeless truck and brood over the ruined day, the skid marks, and the aftermath of spinning tires. I watched him become shorter and shorter, more red, and more angry.

"Then I watched as he noticed the yellow sun which gave him hope. Under its warmth, he scanned the homes around his vicinity. Aha! He noticed the single yellow home in the neighborhood -- a humble but well kept, pretty abode. He marched fiercely toward this ranchhouse, in the way a police officer approaches a vandalizing hooligan. And, just as he reared back his hand in preparation for a knock...

"A knock arose at our very door, Patty! --- during the very moment when the mailman appeared to be knocking on the neighbor's door. My noticing that you had disappeared from your recliner made me uneasy... I was confused, yes, but still set on answering the door. When I did do it, I found my perspective to have been suddenly shifted to the outside of the doorway. I stood looking at a perfect copy of myself on the inside, from the outside! I looked over my copy's shoulder and down the line of our living room hallway. I could see Aunty Jean's bedroom dresser that she gifted for Christmas a few years ago to us to hold all of our kitchenware. That is how I knew it was our house.

"Truly unusual. I was let into my own house by my self, Patty, and shown into the living room, where you sat in your recliner chair yet again! But I looked at the hands of the body I was in, and they were not mine; I was someone else.

"I remember, Patty, seeing you and me sitting there, and being for some reason completely frustrated, and wanting to take out these frustrations on you and me. I said mean things over and over again. And, I was so angry, my resident body (as one might call it?) was overheating wildly. You and myself began to sweat, and my resident body's feet melted flat spots on the carpet.

"You and my self became progressively miserable because of the things I was saying and the heat I was conjuring. I could see what was happening. But still, I felt compelled to continue -- even despite the faces on you and myself of complete and utter disdain for *my* company..."

'Yes, Mary?', I said, to assure her that I hadn't fallen asleep.

"That is all I remember, Patty."

"I'm not sure, Patty. But I do not want any dinner guests tonight or during any night foreseeable. And, I wish for the heat to be turned off. Possibly also I would like to install an air conditioner.

"I understand, but an air conditioner would be nice. Just you and I, and some A.C."

For more articles by Patty Geortenhul, click here. To get in touch with this writer, email geortenhul.patty@surrealtimes.net.