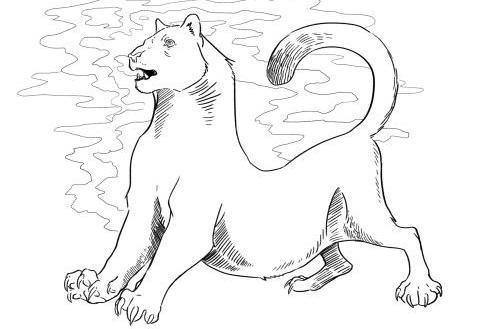 [Artist's depiction of these events by Zotov]

Jim “Chuckles/Minotaur” Hodigan was a serious man. That is, as serious as a man in 1811 Colorado could be while traveling alone with two velvet sacks full of human mouths and a silver panther as his steed. He sought glory in the wild frontier, pillaging the weak and kissing the asses of rich men. What a wonderful, pro-capitalist guy. “Praise the ruling class! They don’t do so much for us. Yes, they do!” That was Jim Chuckles/Minaaur Hodigan’s life motto. Though his political terminology was macabre, he liked the sound of the words “ruling” and “pro-capitalism”. Though he was a voracious reader of Marx and Hegel, he was illiterate.

He came upon a prairie town one Sunday when all of the sudden a gopher popped up out of a hole (not a gopher but a golfer!). The golfer shouted “four” at the serious man and swung his stick on an ear of corn. The corn flew through the air and, whaddaya know, it hit the man in the ear.

Unfortunately, his protective panther had eaten a tab of acid like 30 minutes ago, and it was already starting off bad. Instead of morphing into his demigod form and smiting the puny golfer man, the panther simply stared at his hands, trying to kiss them, moving his lips, but they were too short. The serious man was long dead.