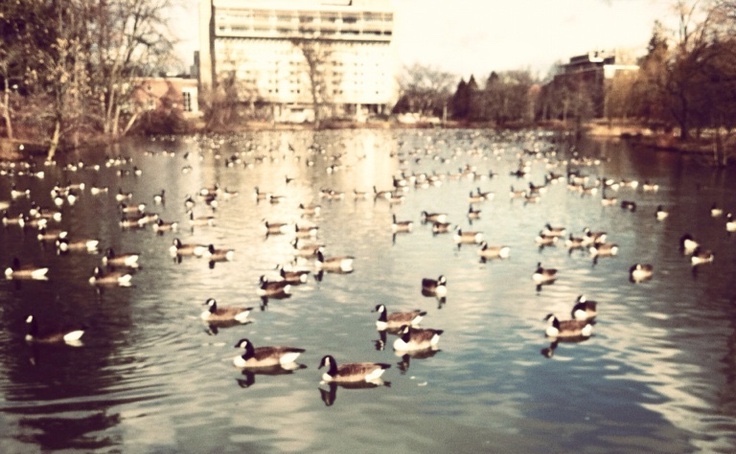 During a visit at the campus pond last afternoon it became apparent that a turf war was boiling beneath the surface of the sitting geese. The Battle of the Beaks was unfolding: the bloodiest battle in campus pond history.

It was an epic clash between the Vancouver flock, led by General Featherstein, and the Atlantic Flock, lead by General Wingsoverman. With the imminent doom of winter, the pond was not big enough for the two of them.

The two leaders with their respective flocks have had animosity for generations. Feathsteins Grandfather was said to have murdered Wingsoverman’s grandfather over a piece of bread in their days of reign. Ever since, the two flocks have been rivals. So, when fate brought the two together earlier this year, Wingsoverman knew that he must seize this opportunity for revenge.

The weeks that lead up to this bloody day consisted of petty hissing, nips at each other’s backs, and brutal yo-mama jokes. The tensions were rising, and Wingsoverman was waiting for the perfect opportunity to strike. The foreplay reached a climax when a girl sitting across the pond decided to throw a piece of bread. It was an immaculate revenge.

As Featherstein raced over to enjoy the savory starch, Wingsoverman drew his sword from his wing and pierced Featherstein through the heart, subsequently devouring the piece of bread. The score was settled, but the battle was sparked as the Vancouver Geese watched the enemy slay their beloved leader. An array of feathers, severed wings, and vicious beaks scattered the pond. The battle went on for hours, resolving in utter destruction and leaving behind no survivors.

For more articles by Cadence P. Crockpot, click here. To get in touch with this writer, email crockpot.cadence@surrealtimes.net.