In an old green recliner by the window, Aunt Millie finds solace in the careful recollection of her younger years: Sitting on her father’s lap around the fireplace, beating her older brother Jart in the potato sack race in front of the old church, eating enough figs with Jim Moby to make each of them sick twice over. Her smile softly widens at the thought of it all, a life filled with discrete pockets of love and connection. The thought comforts her in spite of her having outlived the rest of them. Her husband Rico, her sisters Maeve and Tammy, and of course her dear Jart had all passed without bearing any children. Her gaze shifts downward at the thought that she would be the last of them, and her lips scrunch into one another as if greeting someone barely acquainted. She knows no one will hear it, but she lets out a muted utterance, “They ain’t had none like us, and they never will again.” Suddenly the narrative of her life becomes as blank as the overcast sky. She just can’t shake the idea that she had missed something basic and formative along the way. Maybe her life was only ever to relish in the smiles of people who were nothing now, and maybe they never were even there. Maybe her memories were as fleeting as a burning polaroid. And that there must have been something back there that could’ve made her whole. More than that, she realizes the pain of her loneliness, and how she may die adrift in a sea of air.

At once, Aunt Millie jumps up in realization. She figures that she will meet death inevitably, but she doesn’t have to submit to it. She needs to do something bold, something fresh. She doesn’t need connection, or an escape, or even a purpose. All she needs is the ammoniacal flavor and wholly unsatisfactory finish of America’s premier malt beverage.

Four Loko: Could it have saved Elliott Smith? 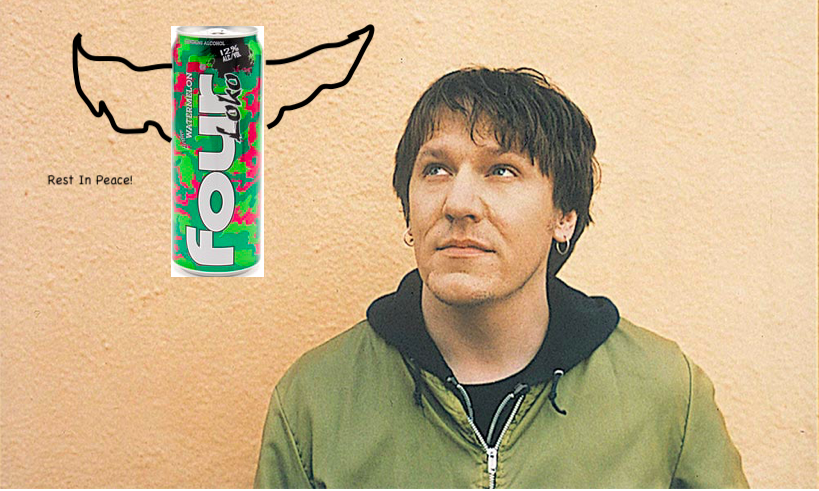 For more articles by Clist Cthrutchy, click here. To get in touch with this writer, email cthrutchy.clist@surrealtimes.net.