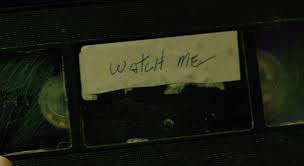 In the most sunless hours of Sunday night, Surreal Times journalist Roberto Piccolo awoke to a knock at the door of his Amherst home. The night was eery and so he was hesitant to wrap himself in his bathrobe and to peek to see who or what had stumbled up his steps. Ultimately he did unlatch his deadbolt, but only with his localized-plane-fragmenter behind his back (an internal tool of The Times, available to staff only). His plan was to send his potential aggressor, if aggressive, into a cloud of shocking bewilderment, and to peek-a-boo him into retreat.

What Roberto found was a that someone had left a mysterious VCR tape in an unmarked envelope on his front stoop. He scanned the horizon for the source of this tape, but there was nobody in sight. He soon found a small note scribbled with sharpie over the tape's original label. It read, "Professor Richshaw's First Lesson for Nuclear People".

It is important to keep in mind a certain premise, when considering Roberto's experience. One of this newspaper's founding datums, and a datum which it holds highly even today, is general faith in things left anonymously on front porches. For this reason, it was immediately obvious to Roberto what course of action would righteously follow.

Roberto buzzed the higher-ups of our organization and called for an immediate meeting. The higher-ups proceeded to contact their respective teams. In short order, editors, journalists, programmers and nearly everybody assembled in the usual assembly spot at a not-unusually unusual time: Herter Hall room 640 -- this time, at three in the morning. Dernberger Spengleton scavenged for a VCR player in the garbage, which J.D. managed to get running. Then, together, mostly the entire organization feasted its eyes upon the video above.

We could have described it, but, considering its describe-ability or the lack thereof, we opted to let you see for yourself.