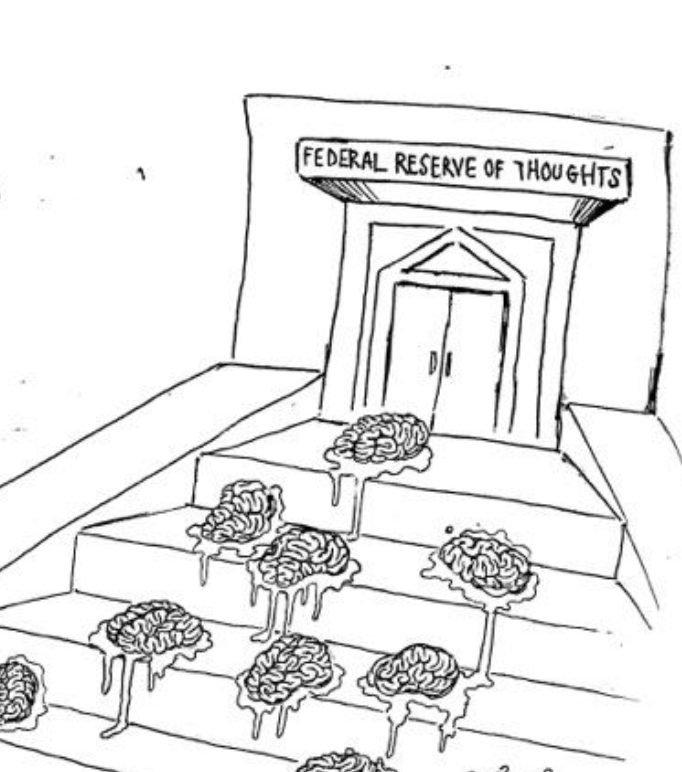 Protests against the Federal Reserve of Thoughts did not have much of an effect. The overarching organization continues to operate, per recent legislation, its power will strengthen.

Congress is decommissioning the existing Federal Reserve (of dollars) starting in January 2022. In place of the dollar-based economy, the Federal Reserve of Thoughts plans to introduce a thought-based economy. In this new system, you will pay for items using thoughts. Once you exchange a particular thought or qualia to pay for an item, that thought will no longer be yours any more. You will no longer be capable of thinking that thought again — That is, unless you subsequently barter for ownership of that thought.

The Federal Reserve of Thoughts claims to have the technology to make this possible. Tom Turdanke, chairman of the organization, explained, “It’s like a blockchain, but for your brains. Ownership (or multi-ownership) of thoughts is maintained cryptographically on a public ledger. Firmware installed on your brain will enable compatibility with the full Brain Chain mesh network.”

Turdanke assured us that the firmware installation procedure will be minimally invasive. It is minor in comparison to the large swath of government-installed firmware that most brains already host.

There has been surprisingly little backlash against this “thought economy plan”. Hundreds of protesters back in February removed their own brains to protest the organization’s unethical control of what thoughts surface into our minds. Protesters in chanted that “you can’t brainwash the brainless”, as they removed their own brains. Despite this powerful statement, the result of removing their own brains was that protesters lacked the cognitive abilities to coordinate travel to the Neuron House this month to continue their protest. And so this recent legislation passed without opposition.

On top of that, the Federal Reserve of Thoughts retrieved the residual brain matter and used it for testing. Some suspect the protesters brain matter was used to further the very cause they were fighting against.

Ahead of the January 2022 rollout, the Federal Reserve of Thoughts will be beta testing it’s new thought-based economy in North Hollywood. Their hope is to iron out any bugs in the system before scaling up to the full U.S.A.

For more articles by Carl Mon, click here. To get in touch with this writer, email cmon@surrealtimes.net.