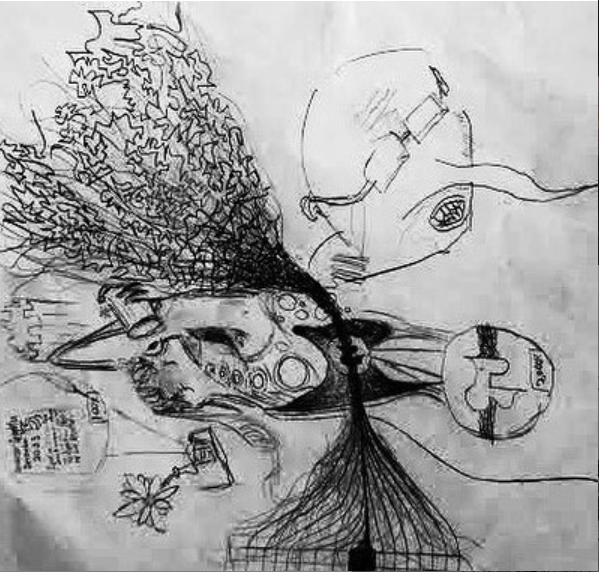 On February 2, 2017, the Surreal Times reported on the Process Too Complicated To Explain, or P2CE (see “Experiments that you Should Probably Know About” on surrealtimes.net). Working on this process were Dernberger Spengleton and Armädeius Galouei. After speculating on the future of a world in which P2CE had been completed, the article explained the function of P2CE (well, it tried): The process takes things that are very orderly, compresses them and then explodes them into a unidentifiable, entropy-filled heterogeneous concoction. And from what this reporter hears from experts, this is only scratching the surface.

Over a year later, the process has finally been completed. The last piece of the puzzle: the help of the disgraced Dr. Linda Peterson from her jail cell. With her correspondence, Dernberger was able to complete the process from beside the dome inside of which Reverend Garland Hobbes is currently trapped. He was able to extract a set of blueprints from the dome.

The process was so intense that the machine could fire only once. A volunteer was needed. R. Bottelby stepped up to the plate. The machine is very small, only the size of a thumb drive. As instructed, R. Bottleby placed it under his tongue. A small buzz was heard, then a loud ping. R. Bottleby winced but did not cry out.

When it was over, R. Bottelby closed his eyes for a seconds. He removed the small machine from under his tongue and said, “I can see further than I used to.”

What R. Bottleby meant was, he can see further in time than he used to be able to.

Dr. Linda Peterson cleared up the confusion via a letter the next day.

“What has happened,” she writes, “Is that R. Bottleby’s brain, which is very orderly, has become entropic. This has even affected his perception of time. With his time-perception function disrupted, Bottleby is unmoored from his temporal chains. He can drift through time’s currents slightly, but he cannot control it. Only vaguely will he see the future, and given how he normally speaks, I don’t think we will gain very much from this ordeal.”

The Times wishes R. Bottleby the best, and would like to note that we consider his predictions newsworthy and would be happy to print them.

For more articles by Moe “Tiny” Schlemiel, click here. To get in touch with this writer, email schlemiel.moe@surrealtimes.net.