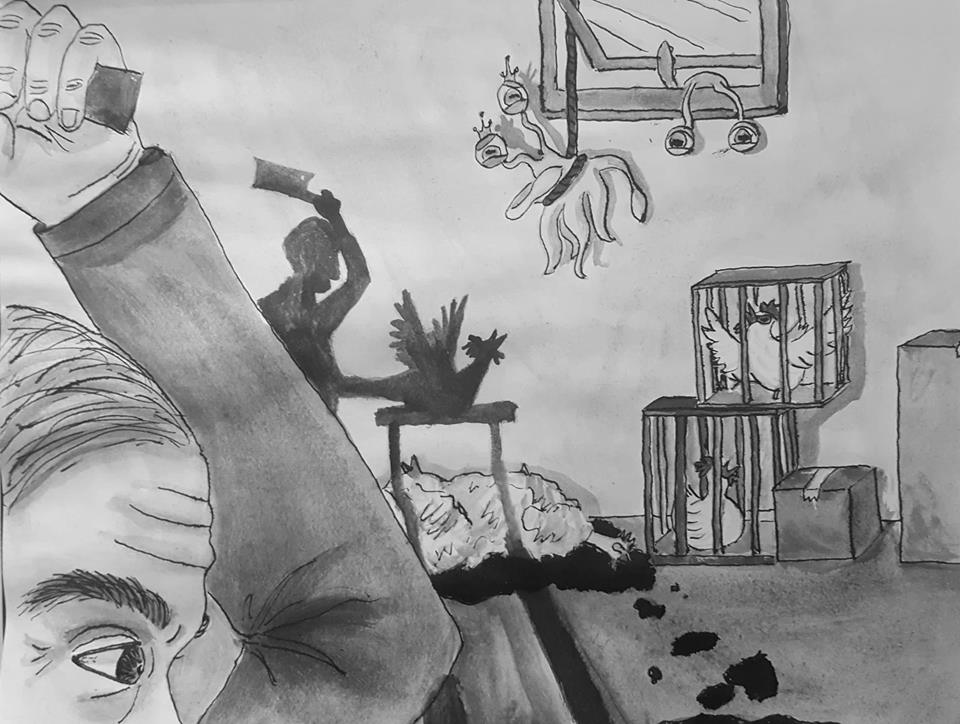 [[Artist's depiction of these events by Marina Parella]]

It’s always a shame when you spend hours, days, or weeks looking forward to a special moment, so carefully planning what to say and what to do, only to go completely blank when the moment finally comes. We all oaf up sometimes. Sometimes, upon meeting someone we aspire to be like or are curious about. Sometimes, when romance is on our minds.

Sometimes, in a very backwards way, our minds falls asleep when we need them most. Or worse, they jitter, let nervousness go frantic, and belch out foolish and mean actions and words.

First impressions are important; and, when they go wrong, despite well intentions and anticipation on both sides, it is sad.

This brings me to the recent transmission from outer space (see link: REALM OF IDEAS COLLAPSES MOMENTARILY, CONVEYS PARTICULAR IDEA). It was obtained by sir Alfred Humbleton in a fashion I do not understand well enough to speak on. What I do understand with certainty, is that this transmission came from a world other than our own, and that the composer’s of the message are not happy.

It puts a story in my head of another species, potentially from planet Nebulönis, but likely from somewhere elsewhere. I imagine that: Leaders of this foreign species meet and discuss us Earthlings. Using long telescopes and ground scouts, they monitor our development carefully, with the intention of introducing themselves only when we earthlings are prepared for extraterrestrial life, or when we can be trusted to handle their arrival with civility.

This otherworldly species, whoever they are, perhaps, has been impressed with the progress of humanity. Perhaps, they thought they would soon say hello! And so they planned to examine us one final time, to confirm their intuitions of our readiness. They sent an executive alien with button pressing power earthbound to make the final call.

And what does this executive find?

He finds us, having captured a number of his species’ scouts (disguised as roosters), enslaved them, bred them for hatred, and forced them to brutally maim and kill each other. How terrible...

But, a miracle! Right before their eyes, UMass PD storms the premises of Ravenwold Greenhouses, the location of cockfighting operation, and frees the alien scouts!

So, quickly, the otherworldly leaders go from excitement at the idea us humans are ready, to disgust that we have enslaved their brethren, to a glimpse of hope that good humans may triumph over the bad ones.

Going forward, the town of Amherst shows its caring nature and strong-handed expectation of morality. The humans plan to rehabilitate the injured and traumatized “roosters”. And there is uproar that such abuses of creatures went on in there hometown.

So, the alien executive is impressed with the humans’ ability to self regulate -- a fundemental quality of civilized species -- despite his still being traumatized by the sight of his enslaved, decrepit brothers and children.

But, again, quickly, things go South. When slight difficulties arise in the rehabilitation of the rooster-disguised scouts, Sergeant Tom Johnson rebranded them as unfixable and ordered their killing.

Before the eyes of leaders from outer space, Tom Johnson murdered the children of another world. Two executives from outer space (apparently King and Queen), having repelled down from their spaceship and into the UMass PD basement window, witnessed their younglings pulled from cages and decapitated by a hatchet, one by one, with the longer lasting innocents being forced to watch the killing of their brethren as well.

At one point, there was a likelihood of interplanetary cordiality, but this likelihood is no longer. As humanity, we’ve made the worst first impression we possibly could, and I wonder how many hundreds of years a remedy will require, if one is possible at all.

For more articles by Ron Gutterston, click here. To get in touch with this writer, email gutterston.ron@surrealtimes.net.