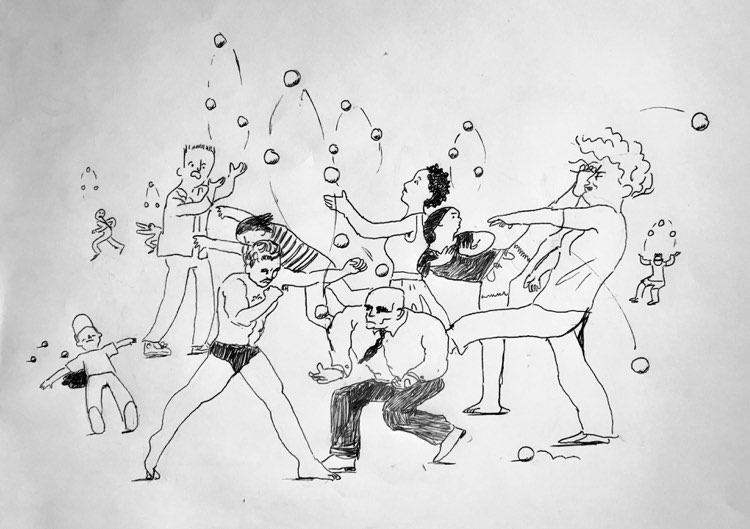 SANTA MONICA, California — People of all kinds grabbed their balls and headed to the beach for the first annual World Juggle Fighting Derby. It was set to be a legendary event — a showcase of focus, creativity, and toughness unparalleled in any other sport. Competitors included a variety of talented persons: circus clowns, kickboxers, even masters of Zen Buddhism. And the day, November 22nd, garnered a hefty crowd who gathered tightly around the center circle.

The goal: to maintain a three ball juggle longer than the other contestants, juggling being is defined as having no more than one ball in each hand at any given time + no balls touching the ground.

After a series of qualifying rounds, 10 contestants remained. The crowd moved inward to force the jugglers closer to one another. Theodore Munnelly blew his trombone and the final round of chaos ensued.

Plumber “Rage” McNeilson tossed his balls in the air and charged straight at professional juggler Thomas Platt, punching him in the face and knocking him out instantly. His hope was to have time to catch his balls and continue the juggle after the knockout, but it didn’t work out that way.

“Tom was doing a high-level juggling pattern, the 8-0-1, trying to intimidate me,” said McNeilson, “I figured I needed to take him out if I wanted any change at the title.” Unfortunately for the both of them, all six of their balls fell to the ground.

From the sheer shock of the knockout, a doctor and a high school English teacher lost control of their juggles and exited the competition. Six competitors remained.

From then on there was a period of in-action, a calm after the storm, when jugglers kept to themselves finding rhythm and in some cases doing tricks for the crowd’s amusement. It is show business, after all.

But the crowd, eager for action, moved inward, forcing the jugglers close together. Three separate 1v1 skirmishes flared up.

Guy Blaylock, a renowned physicist and generally Jedi-like giant-of-a-man laid a spinning back kick into his rival, a man dressed in a large pink bunny rabbit costume and blasting music from a speaker attached to his back. The bunny rabbit man crumpled to the floor. Blaylock seamlessly capped off his takedown with a double under-the-legs juggle.

Ping-pong player Sarah Lenny managed to collide one of her balls into one of instagram personality Jake Paul’s balls, knocking it to the ground while maintaining her juggle.

The Buddhist Monk, who thus far had been completely silent, let out a thundering belch while in the midst of a towering cascade. This caused the amateur boxer, who had been throwing jabs at him, to become startled and unfocused. Seeing the opening, the monk head-butted the boxer in the chest, knocking him to the floor.

Of the final three, those remaining were The Monk, Sarah the ping-ponger, and physicist Guy Blaylock, and it seemed like they might keep juggling forever. The crowd pressed inwards to instigate contact.

As the Monk and Sarah the Ping-ponger exchanged quick-hitting punches and leg kicks, Guy Blaylock snuck behind them and was struck by lightning, incinerated into a million little bits of burning flesh. Then the same happened to Sarah. Left was a sole juggler, the Monk, hovering cross-legged and juggling 7 balls, levitating upwards towards the single cloud in the sky. The crowd was clearly unsure how to respond, and, despite coming from far and wide for this competition, quickly dispersed due to the putrid smell. The Monk has not been seen since, and no winner was ever officially named.

There will be a raincheck competition in February. Walk-on participants welcome. Sign-up at juggle-fighting@surrealtimes.net.