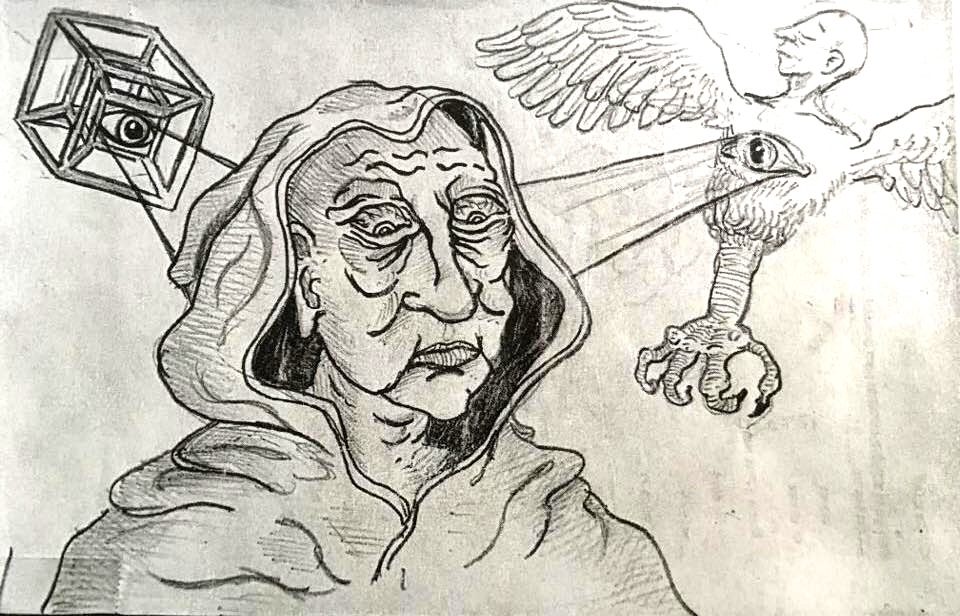 [Artist's depiction of these events by Rufus Williams]

I have spoken with divine forces of two kinds: the Hypercube, and the Angel.

They appeared in my entrapping castle with me, illuminating the chronic darkness of my undesired home. In their simple presence, I felt a wave of regret and sorrow.

“These are the ants I killed this week,” I admitted without meaning to say anything.

“Tell us more,” said the Angel, “so that I may better understand the circumstances.”

When I struggled to find words for my feelings, the angel motioned to the hypercube. The hypercube grumbled but conceded. It sent a beam of blue light into my abdomen that filled me with extreme unexplained regret. When the beam dissipated, I swam in vague memories of regrettable things I’d done. Then the Angel sent a yellow beam into my face which seemed to pull words from within me that I didn’t know I had.

“When I first arrived here, I noticed a couple ants were walking around. I just thought to myself, ‘let them live’. A couple of roommates to keep me company would do me good. But, more and more came, and they started eating the few oranges I had left, climbing in my notebooks, and eating my ex-mentor Theodore’s few remaining paintings which I use to remember him and get lost in in place of windows.”

“Finally, in a swell of sorrow and pitiful rage, I killed them all. There were 16. I would kiss my finger, saying ‘from me to you’, squishing the ant, turning my bloody finger back onto my lips kissing it again and whispering ‘from you to me’. It was the same little ritual an old friend of mine does when he sees a dead flower laying on concrete or when he reads a grave in a cemetery. It makes me feel better, I don't know what it does for the ants. I feel really bad about it. Who am I to say that I have in my life anything more meaningful than the lives of these little ants.”

The Hypercube cowered when the Angel cornered it against the stone. The Angel said, “Damn you, abstract being. Your abstractions allow you to accomplish amazing things, but they also reduce miracles into nickels and dimes in your ‘eyes’. You kill and you kill, without ever realizing what specifically you are killing, or what this particular world means to people. I would banish you from here, but I am afraid you might do more harm from outside than within. So, what do I do with you?”

The angel raised his sword. Frantically, the whimpering hypercube sent small beams of blue in all directions. A beam struck me in the shoulder and I immediately had more vague memories injected into my mind. I couldn’t help but squawk and burp. The angel turned to me and sent his yellow ray into my face. It was blinding, and it again pulled more words from me.

Without meaning to, I uttered the words:

“Great Angel, I beg of you, combine all inconsistencies. Place us on the proper track.”

“Are you certain of what you ask?” asked the angel. “And are you aware of the implications?”

The angel took a deep breath in… As he breathed deeper and more deeply, he stole the air from my chest. The dim light in my castle faded into complete darkness. My sense of hearing muffled into silence.

Death was upon my shoulders, I could feel death's hand. I asked him, “What is now, and what next?”

He responded regrettably that he was unsure. “I don't like how this feels.” We had a long conversation after which he told me, “I feel unsure, I believe it's your time to go back. Goodbye Dernberger. I’ll see you again when your time is right and I am ready to listen to you. ”

I began to dream of fractals and visions of thousands of people running in giant spirals towards a glowing center point.

Then I woke up atop a mountain overlooking UMass, Mount Pollux. I sat cross-legged in the center of a 21st century, technology-enhanced version of Stonehenge. Across from me sat my dearest mentor, Theodore, the man who appointed me as Tender to The Grand Conveyor, and whose castle trap I was surreal-warped into. He appeared healthier than I had ever seen him. Blue electricity was flowing from a square cloud the sky, directly into his skull. I realized that electricity was flowing into me as well.

Eight trombone players emerged, one from behind each of the Stonehenge stones. They played a canon which stopped the lightning flow and awoke my mentor.

He looked to me as though the moment was perfectly expected.

“Hello, Dernberger, it is good to see you. I wonder, how has the grand conveyor been treating you?” he asked.

I told him, “It has not always led me on an easy path, but I feel strangely like the difficulties will soon coagulate into something magnificent.”

“I think you are right, my friend,” Theodore said to me, “Today is a day of otherworldly novelty. Great things are in store for us.”

And at that point, without speaking any longer, we both rose to our feet and walked in a direction I cannot yet reveal. All I will say publicly, now, is that things will be coming together soon.