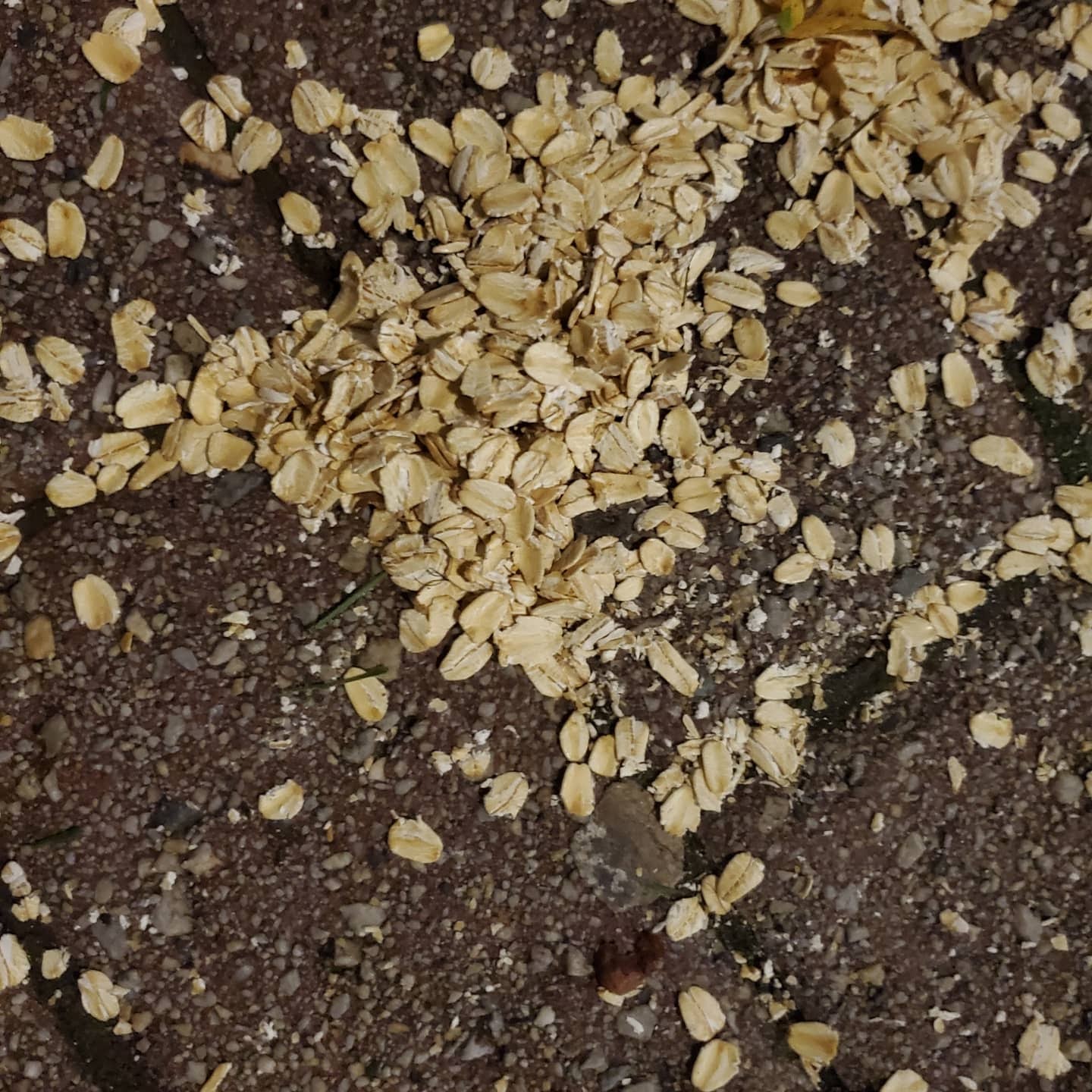 As I write this from the 38 PVTA bus, there is this person sitting three rows up with what looks to be half-boiled oats strewn all through his beard. For the fifth time in the past 14 minutes he has unplugged his CD player, looked back, secured his eyes into mine, and, in a methodical slow motion, moved his hand upward and scratched his nose. I’m starting to think he might want me to copy him?

Oatmeal beards are one of those things I don't handle very well, there's something so sublimely abnormal about it. Even still, I have begun to imagine myself with an oatmeal beard too, but the rest of my face is blurred when I try to picture it, though, strangely, I now recognize myself more that way. When the oatmeal beard turned back to face frontward four of the oats fell out. He then removed a match box from the matted knots of his beard and gently marionetted three of them into it, but the fourth he rose to his nose, very loudly sniffed it, and then finally flicked it the box.

I can't help but wonder why he singled out that oat and I've now begun to feel claustrophobic and have noticed the smell of phosphorus.

I fell asleep for a moment, while my eyes still burnt of phosphorus. When I woke I found a grain of oat lodged in my nose. And I wasn't quite sure this at the time, but now I can be fairly certain it wasn't my left nostril. I took it out and examined it closely. Much like a stranger's hair in your food, it held something enthralling, familiar, something resonant within its warbles and edges. Swallowfull. My nose has now dropped seven more oats:

One that reminded me I don't have a fish hook with me today. One that dared me to swallow it, and another with that rare degree of sociopathy, who would bring chicken salad to a concert. Another whose shape and utterance carried the implicit notion that they had a collection of elk skin tambourines at home. One was most likely just a strung-out cricket with an oat tapped to its antenna. Another seemed to ordain the circumcision of young whole rolled oats. And one of them had tattooed on them, "that person really is just chewing gum, they're not trying to impress you."

When I close my eyes all I see is the oatmeal beard, my eyelids flicker trying to get back to whatever secrets I usually see when I close them. Instead, it's just oats and oats upon oats, rising and bubbling up in the foam, becoming meal. I am the brown sugar swirled and melted. Slowly stretched out like gum under a shoe with bits of trash and rolling papers strobed-throbbed through it. I felt like I was spitting long enough to notice I was spitting.

Somehow now the oatmeal beard is sitting in the row just behind me. I only realized when he broke out in laughter and high-fived his reflection in the constellated, constipated raindrops on the window.

I felt claustrophobic again and looked up to notice the Oatmeal Beard sitting next to me. I swore I saw him whisper to one of the oats. I've been trying to figure out what he was telling them. If it's important enough to tell oatmeal, then it's something I think I better know.

I am still here on the 38 PVTA bus and not much has changed. I am sat three rows from the front, I was lucky and scooped the whole row to myself, so I could stretch out, enjoying the feeling of my half-boiled oats strewn through my beard. However, I feel like there is someone staring at me.

For the fifth time in the past 14 minutes I've unplugged my CD player, looked back, secured my eyes onto where I felt the stare coming from, and in a methodical slow-motion moved my hand upward and scratched my nose. I’m starting to think whatever is making me feel like I'm being stared at wants me to do this.

My oatmeal beard is one of those things I need to feel comfortable when I'm outside my house. Some people call it weird, but for me, the scratchy tones they make is my normal.

However, due to this heavy absent stare I have begun to imagine myself clean-shaven and, in place of whiskers, a galactic shade of purple lipstick standing out, but the rest of my face is blurred when I try to picture it. Though, strangely, I now recognize myself more that way.

When I finally felt comfortable to face back frontward four of my oats fell out. Before the hyperventilation set, I managed to remove a match box from the matted knots of my beard and gently marionetted the three of them who were still singing into it, but the fourth crumbled into the sound of a rusty harmonica. I rose the fourth and frantic oat to my nose and then meditatively sniffed it, then, once it's harmonica broke back into little birds singing out of an oaty throat, finally flicked them back into the box.

I have trouble not fixating on that last oat. After falling for a moment, have they now begun to feel claustrophobic in the matchbox? And after smelling public transport air, have they began to notice the smell of phosphorus?

I fall asleep for a moment, and when I wake I feel back to normal. I feel the kind hand of Detroit, the bus driver ushers me out into the stop at my apartment complex.

For more articles by Melanie Richardson PsyD, click here. To get in touch with this writer, email melanie@surrealtimes.net.