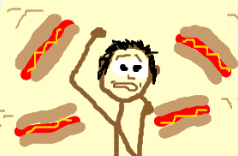 I regret to report that many victims of recent hotdogging pranks have died painful blistering deaths. My own father has died.

Autopsies found victims infected by a horrible contagion similar to anthrax. The disgraced Ant Coordinator is to blame for his pioneering of hotdog-based political attacks. The police department is to blame for their seemingly intentional negligence. The government centers for disease control are to blame for allowing deadly contagion samples to escape their facility.

There is hell to pay. In the wake of my father’s passing, I will be stepping into the role of the full-time Head of The Peripheral Intelligence Agency. I plan to transform the PIA into a multi-headed, fire breathing dragon. The only way to fight extreme centrality, which is inherently violent, is with fire.

Peripherally go the winds of progress.