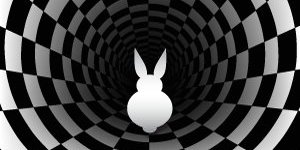 As part of a community-sponsored initiative, patrol officers are filling rabbit holes with cement. The effort has been successful, as made evident by rising test scores. Unfortunately, a protest group is taking action to prevent rabbit holes from being filled.

Officer Brady was scanning Orchard Hill when a bungee cord latched onto his arm and pulled him head-first into a large hole. Some say he fell shoulders deep. Some say he fell further. Backup found him an hour later with a fractured forearm, wide eyes, and a strange state of mind, muttering “Om Mani Padme Hum” repeatedly.

Officer Brady had trouble coming to terms with the fact that only an hour had passed. He believed that it had been “a few Sundays, at least,” and that he was “almost transitioned to the greener side.”

Ever since, he has been alternating between reciting mantras and whistling the pacman soundtrack. He has also made several existential jokes and funny faces, during tense situations. This is a distraction at the station. So we suspended Officer Brady from service until he returns to normal.

UMass Police is investigating these rabbit hole booby trappings. We have a few leads which we are following up on. In the meanwhile, rabbit hole safety fillings are on hold. Be careful out there.