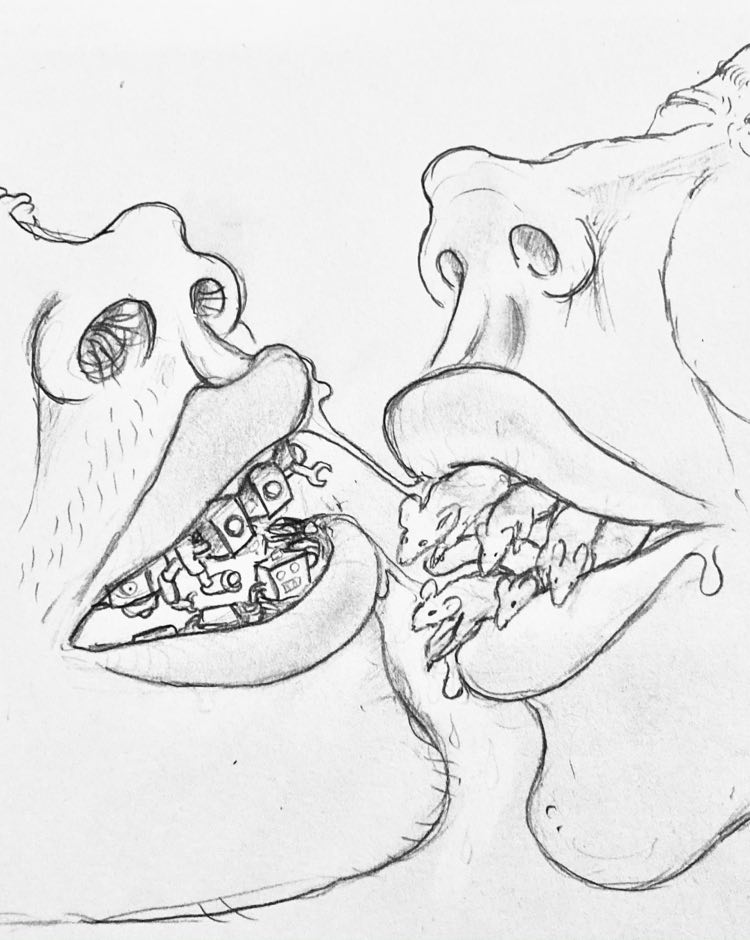 [Artist's depiction of these events by Sawyer Philips

Unlikely. That’s what you said we are, in that article where you called us "unlikely lovers" Felt weird to say, Unlikely. I didn't ever think I'd be unlikely. I was just above below-average, I was nail biting and nail swallowing. I was three days of can collecting for five cents. I was a box car pouring out excess hobos onto the tracks like sweat out of armpits. Unlikely is a driplet of spit getting pissed and huffing it back in a mouth, unlikely is ending up happy after ending up in the underside of the goo hole and the giggly bits. Unlikely is getting a Cadbury egg without its gummy chicken fetus. The question uttered through the god’s udders: Is we unlikely? We don't know what unlikely is. I read only in a sharp glance quickly what you said about us in your last paper. I read it all like eating my food before it runs away. I read it before my eyes would retract and hiss like wet cats at oceans, as they rolled themselves back squishhuddling in squeamish tones to face the better half of my skull. We were on his new couch, I never was on a new couch before, the stuffing in it had never touched the sweet side of the road yet was matted to look like dead birds stuffed in high places. And all the rats crayon-squiggling in my mouth were toddlers jumping at the cabinets. And you were right, we were finally outlets vomiting up forks.

Electricity grew in swayless branches out of jawlines shaped in decapitated chords, tumbling small-falling briefly forgetting-then-remembering it's alive, always so alive. Saliva stitched our tongues together, I had his sweet streaks stroking cross-cheek. As brave mechanized molars contorted their rust proof metals, wrapped in while whirling thin sinew grasps. Tiny buzz saws sleep-reaching out for robotic hunks of chewed up plums.

Picture it, like in health class, our teeth forced closer. Strays and hollows of chewed up food well past its due date stuck over soggy fur of dripping rodents in my mouth, nestled in teeth sockets happily squeaking melodically in tune with their rumbly bellies.

His robotic teeth excitedly ramp up production of whirring gears and somehow still sterile clamps. They are tin foil bitten in my mouth as they confused my invading tongue for some grub.

I hold my breath and ignore the swirling, beating little squirming sounds. I feel him, I feel his wet in me. Not quite dancing, more like what mush does in a blender, his forgetful wet metal teeth joyously still clapping at matted bits of food in my rat teeth, food that's swallowed two hours gone. And briefly in that saliva squish, that gross loud kiss, I found a warm moist nozzle for my scurriers to scurry in. And finally I wish I could swallow his juicy tongue.

And two days later presenting PowerPoints, my mouth flapping out accountancy. Open to the chartered air, my rows of 32 damp rodent chompers still stir and tumble over their nude pink swelled-up-violin-string tails. Rodents pushing over bits of gummed food from gummed crevices. Hunks of ham I never would have eaten cause I'm vegan, no matter what my friends say about the rats in my teeth. "They're living, so it's all symbiotic, bro." I tell them.

It must have been one of his hunk of ham that crossed over while our spitty sparks flew. I can't eat it, but my maw's still flapping, spit still spitteling out and landing on the guy in the umbilical tie who gives me the clams that pay my rent. I take my tongue and squish his hunk of ham up in the back of my cheek to lick later.

These rodents who won't put away their toys and sleep. Still sniffing for nuzzles of unchewed kale. I feel their pink rat noses and wet whiskers on the roof of my mouth. The thirty-three of us all still looking for his tinny wound up teeth's sweet buzzing and whirring.

And later tonight I'll be on his couch again, scrolling my phone for a new job. Us, most likely of lovers, I'll be cuddling and taking comfort knowing he and his voluptuous tongue are in my basement. Unlikely, isn't it, that your invasion of privacy has led to my willing exposure.

For more articles by The Speculative Asexual, click here. To get in touch with this writer, email speculative.asexual@surrealtimes.net.